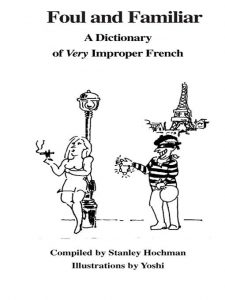 As a student at the Sorbonne, I hadn’t been going up the down staircase more than a few moments when I realized from the rumble of voices around me that the French taught me by my university professors was going to be inadequate for some of my most basic day-to-day needs: food, drink, sleep, lodgings, socializing and a host of unmentionables. My passive and active vocabularies might have been suitable for Molière, but in dealing with that ubiquitous Man in the Street, I was at a distinct disadvantage. At the nearest bookstore, the “slang” dictionaries I found were probably better described as collections of idioms and “colorful” language rather than straight talk. Rather than curse the darknesss, I decided to light a candle, and began making salty notes for what evenually became Foul and Familiar: A Dictionary of Very Improper French, the slang dictionary I had hoped to find on the Boulevard St. Michel the day I arrived in Paris.

Order Foul and Familiar: A Dictionary of Very Improper French

Above are affiliate links, which do not change your price but earn a commission for the site owner.

You can find out more about which cookies we are using or switch them off in settings.

This website uses cookies so that we can provide you with the best user experience possible. Cookie information is stored in your browser and performs functions such as recognising you when you return to our website and helping our team to understand which sections of the website you find most interesting and useful.

Strictly Necessary Cookie should be enabled at all times so that we can save your preferences for cookie settings.

If you disable this cookie, we will not be able to save your preferences. This means that every time you visit this website you will need to enable or disable cookies again.